KEIKO Beauty column by Keiko Iwanaga, a beautician with over 40 years of experience. Collaboration with Dr.Oike opens a new frontier of beauty.

I’ve written about it in a couple of columns.

We are surrounded by artificial flavors!

“I feel like poison gas.”
“Please know the pain of chemical sensitivity, the thoughts of those with symptoms.”

‘A woman from Yasu City said,
“I want people to know that there are people who get sick from good smells.”
“I can’t bring my elementary school child’s friends up to my house. It is so sad.”

A woman, 36, of Yasu City, Shiga Prefecture, who suffers from chemical sensitivity and gets sick from the smell of synthetic detergents and other daily necessities, sent a heartbreaking message to the Kyoto Shimbun’s interactive newsletter, “Response to Readers”.

She said trace amounts of chemicals, including fragrances, cause headaches and nausea, and she can’t let people in her home who smell of synthetic detergents, fabric softeners and shampoo.

The woman wants people to know about the suffering, which is also known as “incense damage,” a metaphor for pollution.

The woman is a yoga instructor.

In 2014, after moving into a new apartment in Otsu, she fell ill.
She felt sick from the smell of detergent and fabric softener that she could smell not only in her own room but also on the balcony and in the common hallway of the apartment.
After being diagnosed with chemical sensitivity at a specialist outpatient clinic in Tokyo, she moved to Yasu City after about a year.

She felt better when she went to a place with good air, and after she switched from synthetic detergent to soap powder for washing.
But even if she can change her own life, she can’t dictate the way others live.
“Detergents these days have a smell that lasts forever and cannot be removed.”

Smells transferred to children’s drills and cards once collected and returned at school, and the smell of fabric softener on school lunch aprons that are used in shifts and taken home. The cards had their covers changed and the school lunch aprons were purchased individually.

She worries, “I can’t say, your smell is bad, so I avoid that person, or if I have no choice but to confide in them about my hypersensitivity, they’ll misunderstand me and it will ruin our relationship.”
She was unable to tell her children’s frend’s parents why she was not letting them into her home, until recently.

In recent years her symptoms had lessened, but this summer his condition worsened again.
She feels that this may be because of the new coronavirus disinfection and sterilization products on the market to prevent infection.

“The ‘good smell’ is a pungent odor to me, almost like a poisonous gas. I never in my wildest dreams thought I would end up like this. I want people to know that there are people who are sickened by scents.”, she says.

In Yokohama, there is a NPO that supports people who suffer from chemical sensitivity.

But awareness of “incense damage” among our society is low.

Tomohiko Nakatsuka, 44, who runs a restaurant in Chukyo Ward, Kyoto, was hospitalized in 2004 after collapsing suddenly in his restaurant while working.
He was diagnosed with chemical sensitivity in 2005. He thinks the cause was a large amount of chlorine bleach used in the kitchen and artificial fragrances smelling from hair and clothes of employees.

In addition to the sore throat and tears, he became tired easily and his memory was impaired. He could no longer go out to eat or travel.

He can’t use detergent, and doesn’t use shampoo or soap, even in the bath.

He wears a filtered mask around his neck when he is at work or when he is out and about so that he doesn’t pass out from the sudden smell of chemicals.

“We all breathe in chemicals unconsciously. Even if a person is not aware of it now, he or she never know when the person will get it. Do we really need to have a ‘good smell’?”, he says.

In order to keep artificial fragrances away from our daily lives and to regain our natural breathing, let’s enjoy “natural fragrances” that are good for our body and comforting. 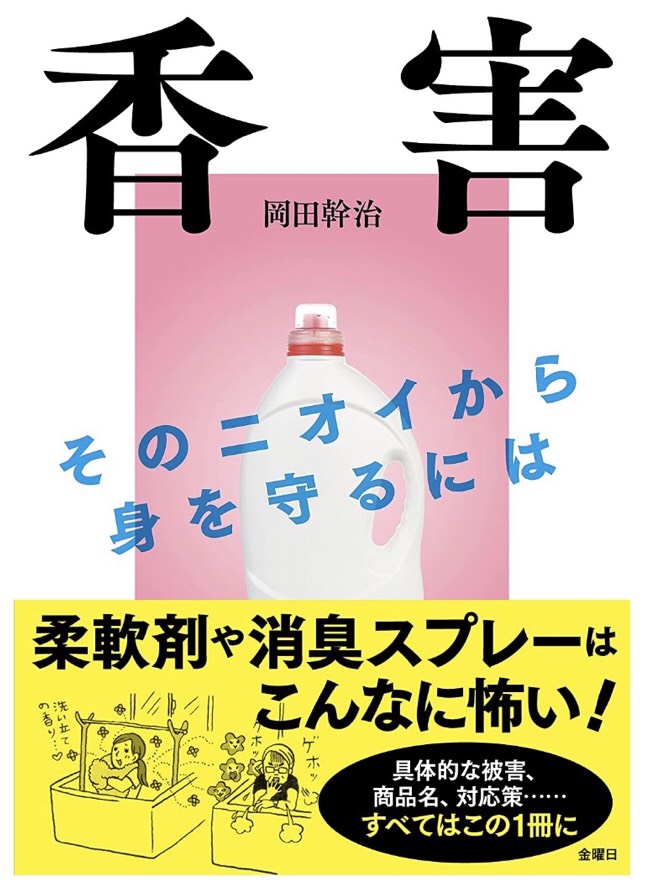